Two weeks ago, I witnessed a confusing and uncomfortable announcement of best picture winner of the Oscars. Due to someone’s fuck up, La La Land was mistakenly announced to be the winner, then quickly it got taken away when they actual winner, Moonlight, was called.

Both movies tell an emotional journal about love accompanied by pain and hurt. I liked both movies, but I enjoyed La La Land more, only because it was infused with music and dance. Particularly, jazz music makes me feel something special. Seb (Ryan Gosling character) descries jazz music as “It’s conflict, it’s compromise, and it’s very, very exciting.” 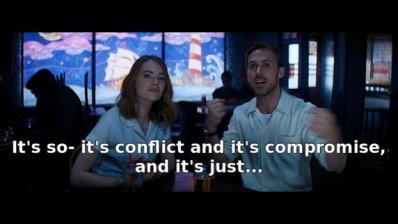 It feels like the quote also refers to love. Personally, I think love is an illusion usually floating in clouds (which was one of the scenes in La La Land). But having butterflies in the stomach never really happens in real life. Love, though exciting, always comes with conflict and need for compromise.

To feel jazzed up, I recently went to New Orleans for the firs time. I went with Dylan, a Tinder date from 2 years ago whom I met in Florida while I was visiting family. We met for drinks and talked about our career (we both work in similar industry), our family (we both have family drama), and our passion (we both like music and beer). He is a white guy, exactly my age, tall, who is the “boy scouts” type – he would make a great partner to go camping in the wilderness with.

Dylan and I kept in touch for 2 years and we have been toying the idea of taking a trip together for a while. So we chose New Orleans as our rendevouz. We stayed right middle of French Quarter. Though, it was the weekend after Mardi Gras, yet the city was full of partiers spilling out of bars on the sewer-smelling Bourbon Street.

One night, we found an outdoor courtyard where they have live music. We drank beer and ate bignet while listening to live jazz. We walked around the city, went to the museums, and met many people. We even met a local celebrity who is a comedian who performs at a gay bar with his gaysian partner, who does drag. Everyone we met were under the assumption that Dylan and I were together. It’s interesting because I did feel like we have been in a relationship for years. Though we only had one time face-to-face contact prior to this trip, we have developed a bond over the years purely through e-communication.

Being with Dylan doesn’t create conflict or need to compromise. Though going on this trip together with him was exciting, Dylan doesn’t necessarily gives me butterlies. Rather, I feel comfortable with him and probably gives off the vibe to others that we have a comfort bond that is typically developed after being in a relationship with someone for years. We even finished each others sentences multiple times.

With great food, great music, and great beers, I had an amazing time in NOLA with Dylan. To be honest, I do think of him often. I fantasized about the possibility of being in a relationship with him. But for me long distance relationship would be very very challenging. It was not easy for Sebastian and Mia in La La Land. But having a romance getaways and listening to jazz with him is the “next” best picture. Just like La La Land after Moonlight being the best picture.

One thought on “Jazz it up”