I just watched a movie called Her. It’s a romantic sci-fi drama film, written, directed, and produced by Spike Jonze. The main character, Theodore, develops a relationship with Samantha, an artificial intelligence through an operating system. He then loses interest when a mysterious existence became too much of a reality. Plus he was getting jealous of Samantha “seeing” other users. Love does make you do crazy things.

It is a bizarre story, yet it resonated with me, particularly with advancing technology for people to connect these days. For me, it started with AOL back around year 2000. Read the story about meeting Chris on AOL here: Fumbling towards Ecstasy.

Almost 20 years after Y2K threat, technology has advanced to instant message capabilities on a small little cellular phone that also has a system that follows your verbal instructions. Call me paranoid, but I think Siri listens to all my conversations and pulls ads on my social media feeds. But, I don’t want to contradict as I write my entire personal life stories on this blog for world to see.

Grindr, Scruff, Jack’d, Surge, Hornet, Chappy, Tinder, etc. are the now AOL, which allows you to instantly connect with other app users for dates, hook ups, and maybe even fall in love with an actual person, not an artificial intelligence that bitch Samantha.

Back in 2016, I chatted with this cute guy on Grindr. His name was Shaun, who was in his early 30’s white guy who worked in a local government office. We had a typical superficial chats with unsolicited dick pics from him. Then I decided to give him my number. He texted me and it got no where. 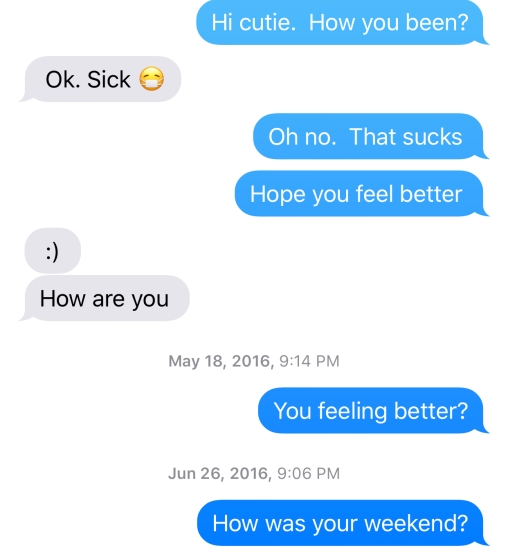 We even became Facebook friends, but never met. At one point, I noticed from his posts, that he moved out of of state. Then about a year ago, he moved back. At this point we still have not met in person.

About two months ago, I ran into him at a party. Not it was a party hosted by one of the biggest rice queens in town and there were full of gaysians. So guess who I run into there. Shaun!

Immediately we saw each other and said at the same time. “So we finally meet!” We had a dialogue that lasted about 5 minutes and he went on to other gaysians. Later that night he texted me to see if I wanted to go out.

When he was somewhat only existed on technology I was more interested. But, after all these years, we finally connect in person and I suddenly lost interest.  It’s almost as if the anonymity made the relationship so much more intense and when the mystery is no longer there and now reality has hit, the thrill was just gone. Also, I realized I was just another one of his many gaysian interests.

Though technology is designed to help us live a more convenient life, I do think it’s destroying the interactive skills for people to connect. I feel like I am more disconnected than before.