About 3 years ago, I met Mike for coffee after chatting with him on Grindr for few weeks. Mike is about 10 years older than me, white guy who just ended an almost 20 year relationship. They were practically married, living together with like 5 dogs, which they had to split custody of when they broke up. He rationalized that break-up created an opportunities to focus on his growth and was a pivotal moment in his life to have a fresh start. Instead of focusing on sadness from loss, he focused on compassion and kindness.

Mike values connection between spiritual body and physical body. (BTW, he is RIPPED from doing yoga daily.) I, myself, practice yoga frequently. For most people, yoga is physical fitness and even gyms now offer yoga classes. Yes, I think it’s a good form of exercise. And, I totally want to look like Adam Levine.

But for me, yoga is also exercising my mind and my spirit. There is an element in yoga where you find peace within through meditation. I try channeling this to my day-to-day life circumstances. I try to practice kindness and compassion to myself and others. After all the negative dating experiences, it’s easier to carry a pessimistic attitude. I am learning to find gratitude. I guess this is called soul searching.

I have been reading Eat Pray Love by Elizabeth Gilbert and this quote really resonated with me: 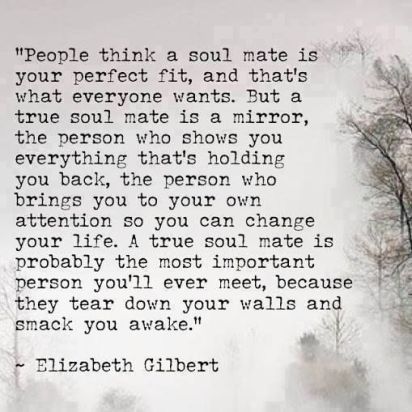 I am constantly reminded of needing to finding a soul mate from seeing couples holding hands in the streets or friends telling me about their wonderful relationships and constant exposures from TVs, movies, and magazines showing images of those perfect couples. While I aspire to be in a relationship, I have learned to fully appreciate singlehood which helps me to be introspectful. It really helps me to place that mirror front of me to reflect every little wrinkles and imperfections, only to learn how to love myself unconditionally. When I am in a dark place, it is when people come into my life to help me find the light and grow.

Speaking of guys who practice buddhism, I have gone out with few of them. Read about Ron (St. Valentines vs. Buddha) and Scott (Size Queen 2). As for Mike, he moved out of town and we lost touch.

Last week, I wrote about Movember movement, a men’s health awareness month. Also read this blog Psychic vs. Psychologist, a story about a guy I date long time ago who died from cancer.

I have seen many people my age, including people I dated, develop health problems. That inspires me do my best to stay healthy. I go to the gym 3-4 times a week, I practice yoga, I get plenty of beauty sleep, I eat my vegetables, I try to decrease alcohol consumption, and see my doctor for yearly check-ups.

Over the summer of this year, I met Alex on OkCupid. He is 44 years old, white, average build and appears to be cute based on his pictures. We exchanged messages and met for dinner. I usually like to talk on the phone before meeting in person, but I decided to skip that stage with Alex. All of his pictures in the profile, he was wearing sun glasses. Which is why I was bit surprised when I saw droop on one side of his face.

He explained that he had a stroke about 7 years ago, which would have been around my age. He suffered paralysis on entire one side of his body and has recovered significantly over time. He now is able to walk and talk. However, he still has some weakness on his hands and some memory problems. He is on disability and after living with his parents for some time, he is now living on his own. When we were about to order drinks, he was trying to order his favorite beer, but he could not remember the name of his beer.

During the entire meal, I was so sad about his whole situation. It was also difficult to find any common interest with Alex and I could not enjoy my time with him. I paid the entire bill of the dinner date with Alex, just to get rid of my guilt.

When I got home, I didn’t know what to do or how to feel about the date. I knew that it would be incredibly challenging for me to develop a new relationship with someone that has a disability. How would someone like me who has never been in a relationship have a boyfriend who has a disability? What would I do if I my long term boyfriend all the sudden develops an illness or a disability.

Despite all the terrible dates I had for the past 20 years, I was at least thankful for what I do have in my life, instead of complaining about not being in a relationship.

I met Marcus from okcupid almost 5 years ago. He is about same age as me, Jewish (who converted to Buddhism), super tall (like 6’5”) and has cute cheeks that you just want to pinch them. Judging by his pictures in his profile, he always seemed happy and free. Maybe that’s what Buddhism does to you.

For our first date, we met for brunch. I arrived early so I got myself a Bloody Mary while I was waiting. When he arrived, I was even more impressed with his height and his smile. I offered him Bloody Mary and he immediately disclosed that he does not drink alcohol at all. He suffered from mood disorder and listed all the medications he’s been on. But he does not take any medications and does not drink alcohol from his belief in power of natural healing. He developed a major passion for meditation and vegan diet. He is also a big juicer! So there I was sipping on my tomato juice with celery and vodka.

It was refreshing to meet someone who actually practiced “just say no.” But it did make me feel a little guilty. Not that I HAVE to drink alcohol to have fun, it is a big part of my social life and I admit, there are times, I indulged too much while partying.

Marcus and I dated for few months, but I think we both realized we were not compatible. We kept in touch for a bit and he challenged me to not drink for month. I made a decision to do this. I chose month of February because it’s the shortest month of year and usually it’s too cold to go out. Not only I went without drinking the entire month, it lasted until early April when I had a glass of wine for my birthday on the night Thomas made donuts. Read more about Thomas on these blogs: “don’t be jealous of boogie” and “not an amazing race.”

Honestly, sobriety for two months did make a difference in many ways. I felt physically lighter and I had more energy to stay active all day. I think this really shifted how I think and feel. And I was pretty drunk after only half glass of wine. The year after that, I decided to try not eating meat and became a vegetarian permanently.

Marcus now has a boyfriend and seems to be even happier. One day, he sent me a card and said he has much gratitude for meeting me and being part of his life. For someone who has mood disorder, he is probably the happiest person I know. Could being too happy a disorder?