As human beings, we all want to be loved. While we search for loving connections, dating can be a roller coaster with the destination being the sense of belonging. We go on a while love roller coaster ride, hitting many ups an lows, thrills and fear, knowing there is an end to the ride. Though the seatbelt keeps us safe, often we experience heart aches. Some can’t wait to get on another roller coaster while someone are forever traumatized and will never get on any roller coasters again.

I experienced many disappointments along the way. When I start to develop feelings for someone and they don’t have the mutual feeling, I immediately perceive that as a rejection. But I am also an equal offender and have been the heart breaker. Read Sexual Chemistry 2 about Paul.

About 5 years ago, I matched with a guy named Eddy on Tinder. He same age as me with otter physique and beautiful eyes behind geeky glasses, all of which I am most attracted to.

Over the years, we hung out in large social settings, either hanging out his friends or vice versa. Few years ago, two circles of our friends joined when a small group of us from each circle went on a trip together.I decided to share a hotel room (and a bed) with Eddy.

As we consume a large amount of alcohol consumption at the local gay club, as any gays would, I danced with Eddy in a fashion that will make everyone assume we will hook up. Of course we made out too. At one point between a pee break and getting more drinks at the bar, I couldn’t find Eddy. My first instinct was to look for him but I also wanted to just have fun with my friends too. Few hours went by, I gave up on search of Eddy and went back to the hotel. The last thing I expected was Eddy in “our” bed of the hotel room, having sex with someone. I am not sure if he realized I walked in the room but he didn’t stop. Maybe I had the option to join for a ménage à trois, but I was really bothered by this. I stormed out of the room, feeling rejected. I was sexiled by my crush and I was crushed. After being sexiled out of my own hotel room, I found a haven in my friend’s room to sleep for the night.

END_OF_DOCUMENT_TOKEN_TO_BE_REPLACED

It’s pride month. People across the country and throughout the world are celebrating diversity by marching in parades, attending festivals, and participating advocacy events. Whether you are G, L, B, T, Q, or any other alphabet letters, rainbow is brighter when all colors come together.

Early this morning, a tragic shooting happened in Orlando, Florida. It has impacted me even more because it was in a gay night club. It reminded me of the Queer as Folk (US version) episode when there was a bombing at Babylon (poor Cyndi Lauper).

END_OF_DOCUMENT_TOKEN_TO_BE_REPLACED

Did you read the story about a gay married couple in Canada who got divorced to add a third person in the relationship? (click here for the article) I believe the third one is gaysian. I read another article about a “trouple” men in Thailand who are actually all married to each other. (click here for that article)

About 3 years ago, I met Rob and Bill on Grindr. They are a gay couple, white, in their late 40’s, living in a beautiful 3 bedroom house with a dog. They invited me over to be their “guest.” I have never done a ménage à trois, but have always been curious. I was out drinking one night and went over to their place on my way home.

It was awkward at first, but I quickly became comfortable. They took turns to ensure I was receiving all the attention. In fact, they were not intimate with each other at all. Not even a kiss.

They probably have been together for many many years and I imagine sex became a bit  too familiar for them. I guess I was there to add a bit spice to their sex life. I admit I had fun and it appears they did too, because they kept inviting me over.

Second time I went over to their place, it was different. Rob was the only one who participated and Bill mostly watched us. Comparing the two, I was more interested in Bill than Rob so it wasn’t fun for me this time. The third time, they were more engaged in each other and I was pretty much the Asian meat in a white bread sandwich.

I then wondered how I would respond if my partner in a committed relationship wanted to have a third party to join.

First, how do you make three people to have equal partnership? It has be exactly 33.333333…% If you are on a bus that only has two seater section, who gets to sit together and who gets left out? The married-now-divorced couple sacrificed their marriage in order to have a fair and equal relationship status with the third partner. Even though they did this, the fact that they were married in the beginning and the third person joined afterward could make him already disadvantaged.

Second, having a sexual encounter outside of the relationship, even if the partner is present, seems rather too much to do. There were moments with Rob and Billy, I was trying to multitask with two people at the same time and it was not easy. I only have two hands and I like to concentrate my hands on just one person when I am having sex.

Third (to really tie in theme of this blog) reason I don’t think polygamy works is the challenges of fitting in the judgy society we live in. How do you go out to a romantic dinner with the three people without getting stared at. How do you bring both partners to work Christmas party?

Although, I am sure sharing life responsibilities amongst three people is a huge benefit. Can you imagine having triple income?

For me, I prefer one-on-one when it comes to a long term serious relationship. But I’d be open to being a special guest for a couple. Hey, I might even try with a guy+girl couple. 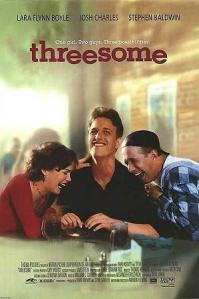